EvTimer is a watcher class that creates an instance to run an event loop. It sets time and interval to run the event loop iterations. The time is a mandatory specification. But the interval is not. It is an optional setting applicable only for the event loop that has more than one iterations.

This article describes the following items.

EvTimer triggers an event after a given time. Then, it repeats the same in a periodic interval. The repeated event call in a set interval is an optional action.

We can set the priority that regulates handling multiple timers. The timer with earlier time-out will be called among the others having the same priority.

The timer avoids drifts on firing events in a loop with the configured interval. It promises a smooth and accurate event loop iteration maximum. 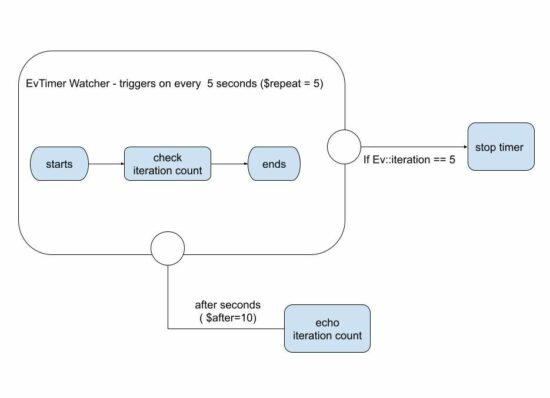 It does not come with the core PHP bundle. It requires the PECL Ev extension to use class.

Confirm the installation and set up by echoing the phpinfo() table.

The PHP documentation page provides the class synopsis of the EvTimer class. It includes properties to set the number of repeated event occurrences, time remaining.

It extends PHP EVWatcher and uses both own and inherited properties and methods.

This is to hold the number of seconds on which the EvTimer will repeat to trigger the event. If it is 0, then the timer will not reinitiate after the time-out.

It restarts the EvTimer watcher once in every repeat seconds as configured. If the timer is not-repeating with repeat seconds 0, then this method will not be called after a timeout.

It creates an EvTimer watcher instance. It’s a four-argument constructor. The four arguments are,

It creates an EvTimer watcher instance in a stopped state. It will not start the watcher until calling manually. It returns the instance on successful creation.

It configures the EvTimer watchers with the $after and $repeat seconds.

How EvTimer used in PHP applications

The EvTimer can be used in many ways in a PHP application. Some of those uses are listed below.

This example uses the EvTimer class’s own and inherited properties and methods.

Watcher 1 is a non-repeating timer instance whereas watcher 2 is not. The watcher 2 is created by setting $after = 5 and $repeat = 2. It calls the event after 5 seconds and repeats the same for every 2 seconds.

It prints the current iteration count on every iteration. It stops the timer once it crosses 5 iterations. The callback allows 2 more iterations further by restarting the timer using again().

It creates a stopped watcher instance. As we have seen already, it is inactive initially until we call the start() on it.

Thus, we have seen about the PHP EvTimer and its utilities. The example created for this article used the EvTmer and EvWatcher class components.

There are pre-defined PHP constants in the EvTimer context. These constants set the behavior of the event loop, blocking and more settings of the timer.

Hi, I’m Vincy. I help build websites, grow businesses, big and small. If that is what you want, contact me.

“She replied promptly. She asked all the right questions and provided a very quick turnaround time, along with support to get any issues ironed out ...”